10 Foods That Are Toxic to Cats 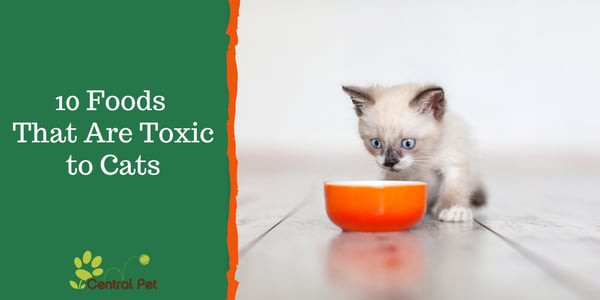 Cats, by nature, are hunters. At their core, cats are opportunistic feeders, meaning they’ll eat almost anything when they’re hungry. Even the most well-behaved house cat would reach for a snack right off your plate if given the chance. While this can certainly be cute and funny, it can also be incredibly dangerous if your sweet feline happens to snag the wrong thing. To ensure your pet’s safety, we’ve compiled a list of 10 dangerous foods your cat should avoid.

The above foods, including leeks, scallions, and shallots, fall under what’s called the Allium family. And while these delicious veggies might be superfoods for humans, they aren’t so super for your cat. For example, when ingested regularly or in large amounts, onion (in all forms) can break down a cat’s red blood cells, leading to anemia. Even small does of onion could cause poisoning. The other foods in this family? While they might not cause poisoning, they can certainly cause gastrointestinal upset.

You and your cat are buds, but keep Happy Hour reserved for your friends of the two-legged variety. Alcohol of any kind should never be given to your cat.

Not only does it have the same effect on the liver and brain as it does in humans, it takes far less of it to do some pretty serious damage. In fact, just a teaspoon or two of whiskey can cause a coma in a 5 pound cat. Any more, and it could lead to death.

Eggs, when cooked, are actually beneficial to a cat’s health. Raw eggs, on the other hand, are a different story. Because raw eggs carry the risk of salmonella bacteria, they are one of the most dangerous foods you could ever feed your cat.

Cats who develop Salmonellosis, the infection found in cats caused by the salmonella bacteria, could experience symptoms such as fever, shock, lethargy, seizures, diarrhea, dehydration, and rapid heart rate.

Raw food diets are becoming increasingly popular these days--for both humans and pets--because of the health benefits that come from eating clean. Still, they require caution, especially when dealing with raw meat.

With raw meat comes the risk of bacterial infection. Meats like beef and pork can contain bacteria such as salmonella and E. Coli, which can wreak havoc on your cat’s digestive and intestinal systems. When it comes to fish, certain kinds contain thiaminase, an enzyme that destroys thiamine (Vitamin B1). Cats who are deficient in thiamine deficiency could experience severe neurological symptoms, such as seizures, stupor, head tilt, ataxia, coma, and if left untreated, death.

Many of us humans love our daily dose of caffeine, but for your furry feline, it should be a no-no. Caffeine has the same effect on cats as it does humans, but because they weigh so much less than we do, those effects can greatly intensify and quickly escalate to the point of hospitalization or even death.

It might come as a surprise, but that saucer of milk isn’t the safest thing for your kitty after all. In fact, most cats are lactose-intolerant! Consuming milk or other dairy products like cheese and yogurt won’t kill your feline friend, but it can lead to an upset stomach and diarrhea--both of which are very uncomfortable to deal with.

You might not realize it, but these bite-sized goodies can be potentially dangerous for your cat. Although it isn't clear why, grapes and raisins can cause hyperactivity, repeated vomiting, and even kidney failure in cats. Because some cats show no ill effects at all, it’s best to avoid giving your cat either of these sweet treats.

Most people know that chocolate is dangerous for dogs. It can be dangerous for cats as well. Chocolate contains theobromine and caffeine, two compounds that are toxic to cats. Feeding chocolate to cats, especially dark chocolate, can result in vomiting, drooling, agitation, hyperactivity, rapid breathing, tremors, seizures, and in some cases, death.

Raw yeast or uncooked bread dough should not be given to cats for a couple of reasons. First, it can continue to expand inside the stomach after it is swallowed, which could lead to dangerous bloating. Second, yeast produces alcohol as a byproduct of fermentation. And, as mentioned earlier, alcohol poisoning can cause significant health problems for your cat.

When cooked properly and served in very small portions, potatoes are not toxic to cats. That doesn’t, however, mean they should be a regular part of your cat’s diet. In fact, the wrong kind of potato could make your cat seriously ill.

If you do decide to feed your cat cooked potatoes in moderation, watch carefully for any signs that show they aren’t agreeing with your pet. And also keep in mind that they aren’t necessary for your cat’s health. In fact, the potential risks involved (solanine poisoning, weight gain) far outweighs any of the potential benefits, which are essentially none.

Related Read: 10 Foods to Keep Away From Your Dogs

Our furry friends can be sneaky and sometimes they get into things that they shouldn’t. Fortunately, there are some easy ways to help prevent that from happening too often. To keep your cat safer:

If you suspect that your cat may have gotten into something they shouldn’t have, you can use resources such as the ASPCA Animal Poison Control Center’s (APCC) free mobile app or call poison control at 1-800-222-1222.

The ASPCA APCC’s free app is called Animal Poison by ASPCA, and it is available for download on both iPhone or Android devices. The app helps owners quickly identify over 300 potential everyday hazards, provides crucial information about the severity of the problem and critical next steps.

In most cases, the sooner that you get help from a vet the better the outcome is likely to be. Therefore, you should take your cat to the vet if you notice any unexplained symptoms.